4 Things Anglers Should Do This Winter

If you’re in the Midwest, you may find yourself stuck indoors this time of year. It goes without saying that you want to be on the water as soon as the ice goes out in April/May! That means you definitely don’t want to waste a beautiful first fishing day sorting through rusty hooks and so forth.

Here are 4 things that Nestor Falls Fly-In recommends to get you ready for spring:

Get rid of anything you don’t use or haven’t used in years. Anything that’s rusty or crusty needs to go. You’ll make room for the stuff you’re actually going to reach for when you’re on the boat.

Don’t forget to put any new Christmas gifts in your tackle box! If you fish Catch & Release, pinch back the barbs on any lures with a pair of pliers right away; this will makes releasing easier for you in May.

2. Repair any gear that needs repairing.

That huge knot of fishing line in your tackle box attached to a hook that you’ve been meaning to cut off since September? Do that today. If you have a dull hook, sharpen it. [And don’t forget to clean your reels!]

3. Go to boat and fishing and sport shows.

Your closest major city probably has a show or two coming through in January or February. We’re going to be at a couple shows in the Midwest in January and February, it would be great to meet up and talk fishing. Check out the new gear, attend some how-to classes if you get the chance, and remember ‚Äì fishing season gets closer every day!

It’s helpful to make a mental list of the spots you want to fish this year. If you’re like most of our guests, you’ve already got a couple places in mind. Whether you’re going back to a place you fished as a kid or trying somewhere new, it’s going to be great to get outdoors.

Don’t know where you’re headed yet? It’s not too late to plan a fly-in fishing trip! 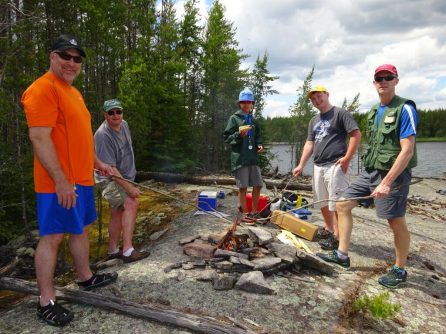