Mike Gardner has been coming to Nestor Falls Fly In Outposts twice a year for over 20 years. It is one of his favorite trips of the year. This year, Mike brought his family up – their first trip in 8 years. Sandy was excited about returning to Larus Lake – and was quite surprised by the Northern that took her line as soon as it did. When she got him in the boat, she remembered the feeling of accomplishment and excitement that comes from bringing in a trophy fish.

The water temperature is now 68 degrees, so the fish are hanging out in the shallows. The winds were out of the southwest, making it not the best wind for fishing in. The girls did really well fishing and everyone had a great time. Ann released the biggest fish of the trip! The Gardners were using 4 inch impulse minnows and 4 inch worms in the shad or smelt colors. Those seemed to work the best for them. They did not bring any live bait with them on this trip.

Larus Lake is in the Woodland Caribou Park which also makes it a good trip to see wildlife. Imagine sitting on the cabin deck and seeing a Cow Moose with her Calf across the bay. Several guests have reported seeing these two on their trip, so keep an eye out. They also saw Eagles and Beavers on the lake.

The Gardner family was kind enough to share some of their photos with us. Take a look! 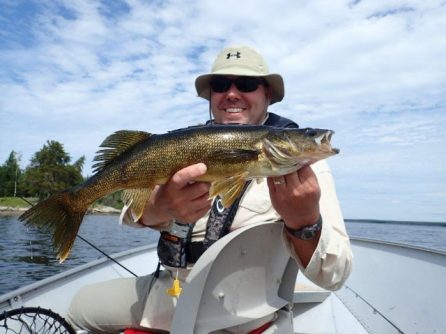 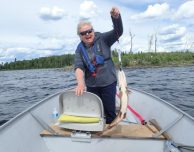 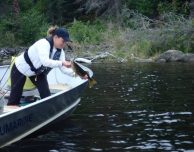