It seems like yesterday that we closed the cabins up for 2016, and now the 2017 season is around the corner! The notes here might be familiar to the folks who get our annual letter, but should give you a good look behind the scenes at Nestor Falls Fly-In Outposts…

Dave and I got an early start in 2016, thanks to a mild winter. In fact, the boys were able to start flying supplies to the outposts in early May. It takes awhile to get all the motors, fuel and propane back to the outposts. It’s about 24 Otter loads and another 24 trips between the Beaver and Cessna 185.

It didn’t help matters that we had to open the cabins with only one Otter! During the winter, Dave found out that ODK’s Otter wings needed work. In April, our son Jon drove the wings in the back of our trailer over to Geraldton. Repairs took longer than expected and we didn’t get our second Otter back until June. The good news is that the Otter’s wings are good as new and ready to rip.

We had a few other surprises, too ‚Äì ice took out the docks at Cairns and Keeper, and the shower at Keeper gave us fits! The docks have been rebuilt and the shower is fixed and looking like new again. On the other hand, our brand-new extra-wide dock was a steady help all season long. The extra space helps us hold your gear and ours when we’re loading up the planes. It’s just perfect, especially on busy days.

Then, in September, Dave and our good friend Greg Rademacher spent a few days taking wilderness photos, outposts and staff shots for our new brochure that’s in the works. Just a week or so later, we hosted Old Town Canoe and Kayak for a photo/video shoot on Kay Lake. The video is beautiful.

Lastly, we were asked by Rich Hulina of Bush Flying Captured if we’d like to have photos taken of our aircraft, so a shoot was done on the two Otters and, of course, Dave’s Super Cub. Photos were awesome! We’re hoping to have some for sale this summer, and Rich is in the beginning stages of putting together another coffee table book.

A word to the wise, Dalseg’s, the grocery store in Nestor Falls, no longer accepts credit cards. Be sure to bring cash or a debit card. You should also plan to shop later in the day when you want to stock up on Molson! You can’t buy alcohol/liquor before 9 a.m. Monday-Saturday or 11 a.m. on Sunday. If time catches you short, grocery shop in Fort Frances or Emo where they have longer hours and take credit cards.

Well, that’s all our updates ‚Äì at least for now. Dave and I have been so grateful to get to know all of you over the years. It’s wonderful to see familiar faces each season, and we’ll never get tired of hearing how much you love fishing up here. We’re honored that you choose to Escape to the Wilderness with Nestor Falls Fly-In Outposts. 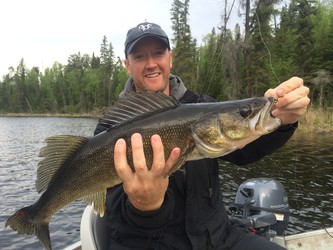