Bet you’re wondering what exciting things we’re up to!

It’s about that time of year when we’re ready for fly-in fishing to start. Too bad Mother Nature isn’t on the same page, because it’s pretty cold!

That kind of weather isn’t good for too much ‚Äì except heading out to the curling club.

Ryan, our grandson, is 8 years old now. He has started to curl Tuesday nights here in Nestor Falls. The school has been doing this program since Dave was a youngster growing up in Nestor Falls.

If you don’t know much about curling, the game is pretty simple. The object of the game is to get your stones closest to the center of a bulls-eye on the ice. (Maybe that’s easier said than done!)

So far, Ryan is off to a good start. We hope he enjoys it as much as his papa did!

See you in May,
Dave & Michelle 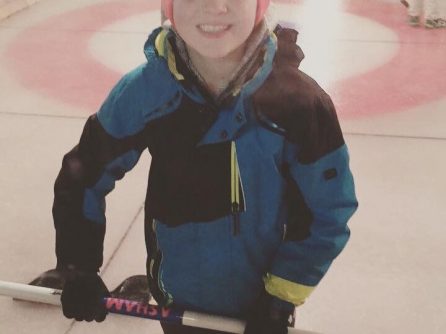