To get you folks thinking about Walleye season, here’s a fish story about how Steve Johnson and his fishing partner Jim Bahrke caught a 29 in. 11 lb. Walleye.

The duo had been doing fly-in fishing trips to Northwestern Ontario for 40 years, but this Walleye was easily the largest Walleye they’d ever caught fishing in Ontario. It was caught during a late August evening, the group’s last day on Larus Lake. Earlier in the week, a GIANT 42 in. Northern had t-boned a Walleye Steve was landing, but wasn’t able to net that Northern. So his goal for the last night was to land a trophy Northern.

Steve was out trolling for big Northern, and he was rigged with a heavy rod and reel, 20 lb. test line, steel leader, and an 8 in. Muskie/Northern lure. He and Jim had been trolling for a short time when he had a great hit and had a “fish on.”

To the boat’s surprise, when they netted the lunker, it wasn’t a Northern, but the 29 in. 11 lb. Walleye!

Just goes to show that when you’re Walleye fishing with Nestor Falls Fly-In, anything can happen. See you all in a couple weeks! 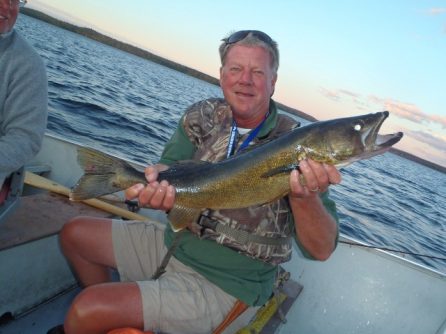