Well, another year is in the books with the great folks up at Nestor Falls Fly-In Outposts. This year was like no other we have experienced. The lake water levels were the highest Dave had seen in decades. Many of their cabins were inaccessible due to the high water. In addition, many of the docks at the cabins were either under water or in need of repair from the harsh winter and water levels. On the final leg of our 15 hour drive Michelle called us and relayed the sketchy situation. Our trip into Lount Lake was in jeopardy as the pilots were unable to access the island cabin. We forged on with the belief that some kind of alternate plan was in the works and we would miss out on our time at the cabin.

When we arrived later that afternoon we learned that Dave had taken a crew up to Lount, disassembled the dock and ferried it to another island across the main lake so the Otter could safely dock for unloading of gear and such. This was no small feat considering other cabins and docks up north also needed the same attention. Dave, Michelle and the rest of the staff went above and beyond to make sure the boys from Illinois would not be denied.

With the high water the smallmouth deviated from their normal springtime spawning pattern. After searching in vain for them at our usual spots we boated only a handful of smallies. We surmised that Northerns would be more active above the now covered weedbeds. In short order we found that the big Northerns were extremely active, more so than any other year we had fish for them. Once we discovered the action the Northerns were going to provide us with we went with it and boated five fish just over 40″ inches in an afternoon.

Walleye fishing was outstanding! We quickly lost count of how many we had landed! They supplied us with many delicious meals during the week.

Best regards and thank you, 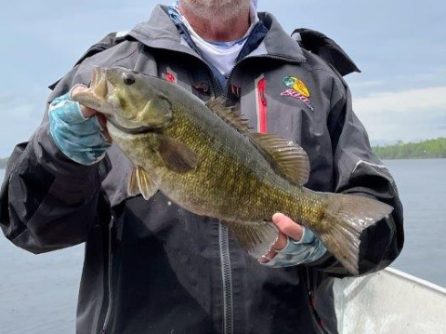 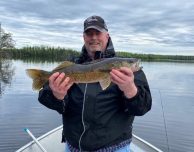 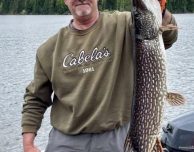