Brothers Mike and Jim Britt have been fishing with Nestor Falls Fly-In Outposts for 23 years.

Mike and Jim say that their most recent time at Keeper Lake was fantastic, as always. During their June 2019 visit, they caught and released over 800 fish. Yeah, we keep count. Some other numbers for you are that their walleye were consistently 16-18″, with their northerns being 23-25″, and some were even over 30″!

To catch their monstrous northerns, they throw a silver minnow and pork rind as crankbait, and for the rest: minnows tipped on jigs and plastics, leeches and worms tipped on jigs, a Banjo minnow the latter of which Mike has a story to share.

“Jim and I were fishing a stretch of shoreline in the evening for walleyes. I put on a Banjo minnow and cast out. I got a hit, and the Banjo minnow was pulled off the jig hook. We kept fishing, and an hour later, I looked and landed a 1 ¬Ω-pound walleye, and in its throat was…yes! My banjo minnow! It kinda makes you wonder how many of the fish you’re catching along a given shoreline are “repeat offenders.” Probably more than you think!”

Mike swears that story is true and that Jim will even verify it.

Thanks for sharing your “fish tale” with us, Mike! We look forward to seeing you guys back at Keeper Lake soon! 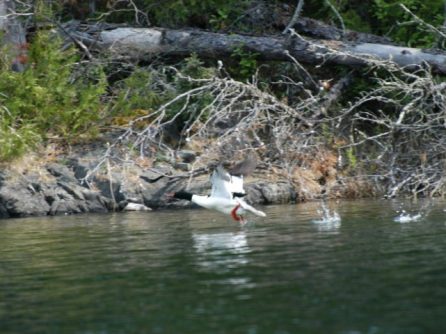 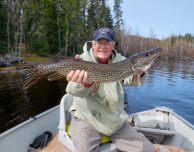 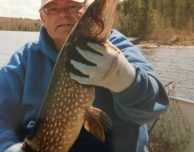