In late May and early June, the rain (and snow!) in Northwest Ontario can be unpredictable! It’s hard to remember today, when it’s 72¬∞ and beautiful at the Nestor Falls Fly-In base. But now and again, Mother Nature shows us that she’s in charge!

Back in June, Mother Nature was in charge with some stormy weather while Jay and his group where at Onepine Lake. They didn’t let her damper their spirits; they hit the water despite her and found the fishing was excellent!

Jay told us he had the best luck on Strawberry Lake, the portage lake that’s a short walk from the Onepine cabin. He said the largest Walleye for the trip was 23″, and most of the ‘eyes were in the 15-18″ range. (That’s a great size to eat!) The group’s largest Northern was a good one at 42″.

Even though Mother Nature can be crazy at times, she’s also generous with the trophy fish! 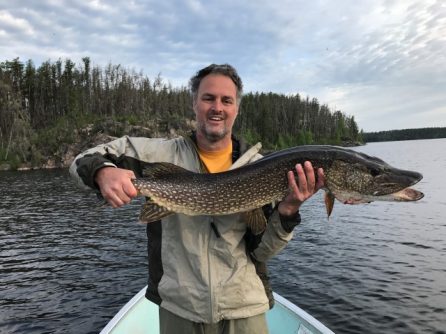 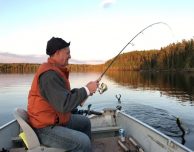