We started our Fall season with our Archery Moose hunt. Matt and his two hunters Bob and Bud arrive at base camp shortly after lunch. After settling in they made a plan for the evening hunt. No luck this day. Next day after scouting out a couple of potential spots they settled in on a large swamp. Matt’s first idea was to set up both hunters 60 yards on opposite sides of the swamp but after taking about 10 steps and filling his boots with mud and water he decided to put one hunter on the south side where it was easier to walk and the other hunter 200 yards down the shoreline. With both hunters in their positions he began cow calling. Matt then picked up a moose shoulder blade and raked it on a nearby tree.It may sound funny but a moose shoulder blade sounds the same as a bull moose antler raking a tree, a method that is more aggressive than cow calling.It wasn’t 5 minutes after that he thought he heard a bull grunt. At first he thought it was his imagination playing tricks on him but the 3 grunts that followed he realized they had a bull moose on his way.

Excitement built and adrenaline started pumping both for Matt and the hunters. We knew it was going to be a big bull as you could hear the echo from his large paddles as he raked and broke what seemed to be every tree he walked by.15 minutes later the bull poked his head out of the brush looking straight at Matt. He was big, very big.Matt estimated his antlers to have a 50″ spread, maybe even bigger. Matt could see Bob hiding in some brush with his release attached to his bow string waiting to get a shot.bull started walking to the north side of the swamp where we did not think he would go, right though all the muck and mud that Matt had tried to walk through earlier and stopped broadside directly in front of Bob and Matt anxiously waiting for the shot.

It turns out the bull had stopped at 80 yards, 20 yards out of range, so close but yet so far away.The bull started to walk towards the shoreline. Matt Signaled Bob to follow as they walked towards the bull grunting with every step and managed to close the distance to 60 yards.We were too late, the bull had stepped into some thick cover. Matt repositioned Bob in the tall grass right on the shore. Then he jumped into the lake splashing his feet walking in the opposite direction of the bull, making soft quiet cow calls trying to make him think his girlfriend was leaving, it worked.Matt looked back over his shoulder to see the bull turn around, put his head down and start grunting again.this moment he knew we had him, he was walking straight down the shore right by where Bob was sitting. The Bull must of caught scent and began walking out into deeper water he then stopped and looked right in Bob’s direction. He was now at a 40 yard shot.He turned and started to walk off when Bob managed to take a shot and let his arrow fly, the moose was 45 yards away.The bull immediately ran wide open 400 yards down the shoreline before crashing into the bush.

The rest of the night was spent recapping the highlights of all of the excitement we had just had with anticipation for their 2014 hunting trip. 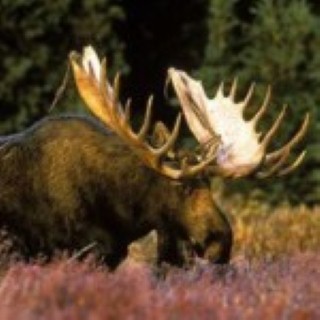