If you’re planning on releasing the fish, it’s also better to net it. The shorter the fight, the better the chances for a fish’s successful release. Some modern nets are constructed with the well-being of the fish in mind. Frabill has designed a net that enhances catch and release. The bag of the net was designed to protect the fish.

Also, when the bite is hot, since you can land a fish quicker with the net, you can get your bait back out to the biting fish faster. Netting them enables us to do so.

Lastly, nets protect angler’s hands from sharp hooks. Hand-landing a fish can result in a hook getting into a hand, especially when crank baits are being used. A hook in the hand is no fun and can cut a fishing trip short. Nets greatly reduce hooks getting in hands.

Now, just because we can land the fish quicker with a landing net, that doesn’t mean we should rush the net-job. You want to tire the fish enough to be able to lead it into the net head-first. If you try to pull the net up behind the fish, it will often display one final burst of power. That one final burst of power will sometimes enable the fish to escape. Don’t put the net in the water until you can sweep the net down and lift the fish in one motion. Nets that are in the water while the fish is thrashing often catch hooks that are in the fish’s mouth. Those hooks then pull free from the fish, and if the fish is not in the net, hooks pulling free are a bad thing.

Fishing season is coming here: Now is the time to put your landing net into use on your fly in fishing adventure of a lifetime . Keep the above ideas in mind and you’ll be using that landing net more effectively to get those hogs in the boat.

Escape to the Wilderness, 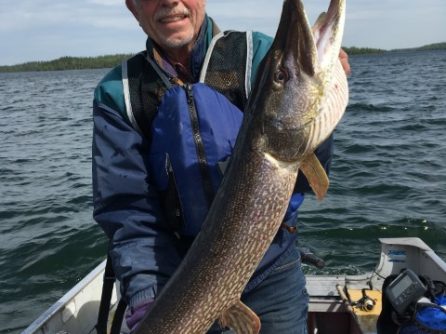 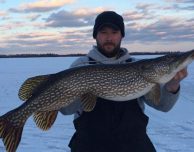