Nestor Falls Fly-In has been NO stranger to forest fires, in the last couple of years. The province of Ontario has been plagued again this year with fires. The cause of these fires has not been reported but one likely scenario could be that the fires began with lightning strikes in the area. Typically lightning doesn’t cause fires but during rain droughts and heated summer days cause fires to occur more easily. 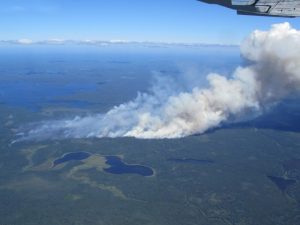 Over the course of the summer, these fires grew. We were one of the lucky ones as Fire officials set up sprinklers on structures in the area of the fire in an effort to save them. We were shut down for a couple of weeks as the smoke became to thick on the lakes to make it safe for flying.

With the lovely hot dry summer we had, it came as no surprise when our son Jon noticed a fire on the island through the narrows to the North of the Base. I guess some fishermen decided to have a shore lunch on the island which makes a great spot for watching the planes coming and going BUT they did not get the campfire out completely out. Jon and the boys jumped on the fire before it did much damage.

So please make sure to put your fires out by pouring water over the coals and amber.