Although they reported having released fewer than other years, they caught in the ballpark of twenty per day, with the average sizes being 30″ pike and 16″ walleye. Their largest were a 39″ pike and a 25 ¬Ω” walleye, using jigs and twister tails, as well as spoons for the pike at typical depths of 4 to 14 feet.

What the party lacked in fishing, they certainly made up for with surreal scenery. With a forest fire rolling through, they observed smoke, ash, and burnt cinders; and on May 20th and 21st, they experienced “fishing at dusk” during what was actually midday when a large, dark smoke cloud blotted out the sun. The surface of the lake was strewn with fallen ash and cinders, and on their way back to camp, ash rained down upon them, and they saw bursts of flames along the treeline several miles in the distance.

Back at their cabin, they saw a “not too wild” hare, loons, and ducks, and where the boats were secured at Moar Lake, they observed moose and wolf tracks.

We’re sure the forest fire conditions had something to do with the party catching less fish than other years. Nevertheless, we’re glad that Bob and his crew trust Nestor Falls Fly-In Outposts to handle their outdoor adventure, and we’ll keep our fingers crossed for no more forest fires when they return next year! 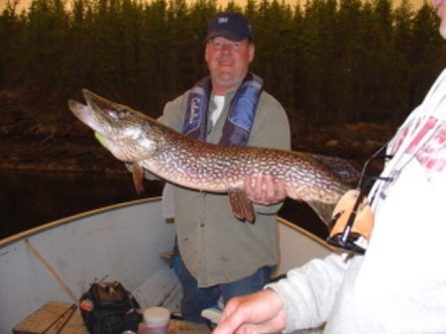 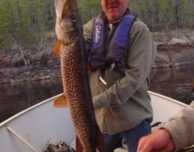