Grilling at the Outpost with Friends & Family

The new floors we put in at our Larus Bay outpost this Spring have been a hit with many of our guests, including the Jerry Hayner party.

We pride ourselves on our beautiful cabins, making frequent updates so that you and your party are able to relax and enjoy your fly-in fishing vacation both on and off the water. Jerry and his party took advantage of our cabin perks during their stay at Larus Bay, grilling up some good looking chops on the barbecue. There is nothing quite like socializing with friends and family over some savory steaks in the wilderness!

In addition to some splendid time at the outpost, Jerry’s party was also incredibly successful out on the lake, particularly in the North Bay. Overall, they released about 2000 fish! Eleven of those fish were Northern Pike over 36″, four of which exceeded 40″. The largest Pike was 45″ caught by Denney Lucas. The group also reeled in an impressive 29″ Walleye.

In the end, the Hayner party had the perfect Northern Ontario adventure, topped off by a calf moose sighting by the cabin! 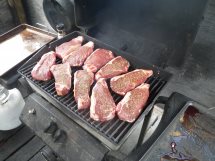 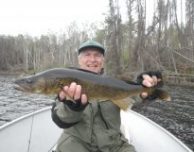 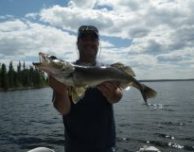 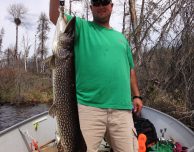 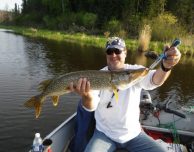