The crew was super busy this past winter with our fleet of aircraft in the maintenance facility. Our planes come out of the water in mid October and each airplane spends a good month in the hanger. There is an extreme amount of time that goes into making sure those airplanes that you fly in at Nestor Falls Fly In Outposts are in tip top shape because each plane flies about 300 to 350 hours every summer. Our aircraft must be inspected annually for corrosion in areas of the aircraft which normally can’t be inspected visually. These very stringent maintenance practices set by Transport Canada to ensure that we maintain an enviable level of dispatch reliability. There are many extended hours put into each airplane, along with new costly parts. We always strive to provide you with the best float plane experience, and the constant upkeep of maintenance of our airplanes is number one priority.We would like to thank our maintenance team for a great job they do keeping us flying safe in the busy months.

Here’s a little bit of trivia for you..

There were only 1,657 Beaver’s built. The De Havilland Beaver has a rich history around the world. August 16th, 1947 marked the maiden flight of what would be known as the DHC-2 Beaver aircraft. Our Beaver C-FMDB is serial # 268 and was built in 1952. The Beaver has a 450 hp. Pratt & Whitney engine. It had been flown by the U.S. military and did some civil work in Sweden before returning back to Canada through Iceland & Greenland. 808 Beavers are still in operation.

There were only 460 DeHavilland DHC-3 Otters built. The rugged single-engined, high-wing, propeller-driven DHC-3 Otter was conceived in January 1951 by de Havilland Canada as a larger, more powerful version of its highly successful DHC2 Beaver. We are lucky enough to own two. Our first Otter came from India. A Canadian company from Regina bought 14 Otters from the Indian government. C-FSOR was built in 1957 and is Serial # 239. In 2005 we did a Garett Turbine conversion. Giving the bush flying a new look. Our second Otter C-FODK is serial #13 and was built in 1952. It was the first Ontario Ministry of Natural Resources Otter. The spring of 2008 we did a Garett Turbine conversion as well. The Otter and Beaver are no longer in production.There are about 165 Turbo Otters still flying, mostly in Canada and Alaska. 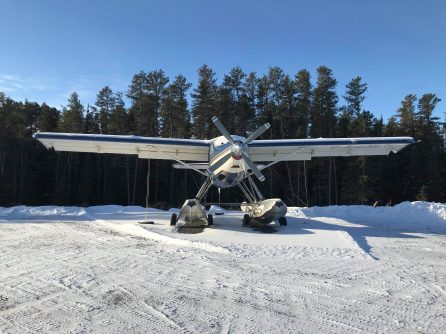 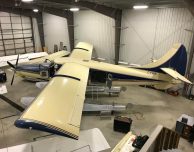 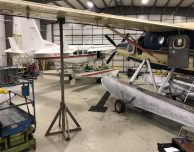