Well if Covid wasn’t enough for the Outfitters in our area we are now dealing with forest fires up north. Dave has been flying for over 44 years and has never seen fires like this before. These fires are over 100 miles long starting north of the English River and head toward the north. They have already evacuated 4 Reserves and they are now concerned about the fires making their way to Red Lake.

On Sunday, Mike and Dave flew up North to have a look at our cabin on Keeper Lake but as they got over top of the cabin they could not see the cabin due to the amount of smoke in the area, so they decided not to land and get the heck out of the area.

They then found out that there was a fire surrounding our Larus Bay location. Luckily another outfitter was flying around checking on his properties had extra equipment to lend to Dave. Mike and Dave spent the rest of the day and into the evening watering the hotspots surrounding the Larus  Bay cabin. As Mike was hosing the grounds Dave went down towards the dock to grab something from the plane, thank God he did because the boats on the shoreline were on fire! The fire was so hot that it melted a hole on one side our our boat. Still unsure of the damage on the other boats. Once the boats were taken care of they then noticed the dock was on fire where the 206 was tied to. They hosed the dock down well to get the fire out and took it as a sign that it would be safest to leave.

So far from that trip, we had lost a boat (possibly more), one of the old sheds, and the outhouse (shit was literally on fire that day!) and our dock.

The following day Dave sent Jon and Pat up north to check on Larus Bay to make sure that all the hot spots were out. Kyle was flying to pick up a group further north and on his way back he swung over Larus to find that there was now a fire approaching our Beach location, too close for comfort. Kyle then notified the boys and they hustled over to the beach location to start soaking down the grounds. What a nightmare that became. Moose, Lynx, Rabbits, Mice and all kinds of other animals came running out of the forest running along the beach. Jon couldn’t believe what he was seeing. Of course, we have never had to do this in the past. The boys got smoked in and had to spend the night at Larus. They soaked the grounds, cabins, and sheds into the night. Thank goodness for our Satellite system as we have been able to stay in touch with them. They called out this morning and all is good at both locations now.

As soon as I have time and the fire season is over I am going to have a pitty party. LOL 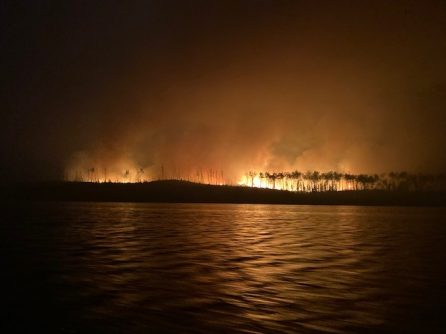 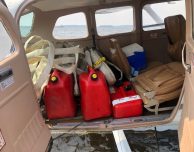 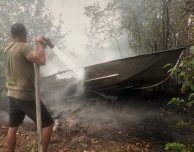