How to Play ‚Äì and Win ‚Äì the “Northwoods Olympics”

The regular Olympics is missing our favorite sport ‚Äì fishing.

You’ve probably been working on your fishing skills since age 5, so don’t let that talent go to waste. Host a “Northwoods Olympics” when you come to Nestor Falls!

The Williams/Burghardt group came up with the idea on a trip to Cairns Lake a couple years back. They came back to Nestor Falls to fish at Cairns earlier this month, and of course, they hosted a Northwoods Olympics.

“For the Olympic competition,” Mark W. told us, “points are tallied every day for most Walleyes and Northern by boat and largest of each type individually.”

This isn’t a one-sport contest, though. Points are also awarded for the nightly poker tournament!

Last year’s winner, Mark W., defended his title and took home the Gold again this year. Don W. brought home the Silver and Mike S. aka “Springer the Walleye Dinger” won the Bronze. (By the way, a “Gold medal” is a Labatt’s Blue.)

You can host a Northwoods Olympics if you catch fish, play poker, and drink Labatt’s. No problem!!

PS. If you’re a Packer fan, Mark W. also said the largest Northern of the week (38″) was caught on a Green Bay Packer lure… 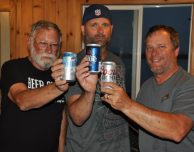 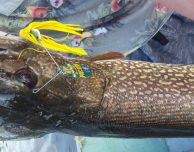