How to Reel in a Muskie in Northwest Ontario

The best way to catch a Muskie up here? Just give Kay Lake a shot!

By 2013, Jim Britt and his son Mike had been coming to Nestor Falls Fly-In for over 20 years. They had been to at least 5 of our outposts ‚Äì but not Kay Lake. They flew in for a two-day fishing trip at Kay and they’re now are addicted to that spot!

In two evenings trying for Muskie, they boated four huge fish and one more bit off the line while they were fishing for Bass without a leader.

Jim said, “My Muskie was 32″ ‚Äì but looks bigger in the picture. Mike’s Muskie was 40″ and looked bigger in real life!”

Mike caught that 40″ Muskie in Derby Lake portage off of Kay Lake. (For the Muskie bait, they used yellow bucktails.)

“It was awesome to see the fish the whole time in the crystal clear water,” Jim said.

They’ll be back to Kay some day soon we’re sure! 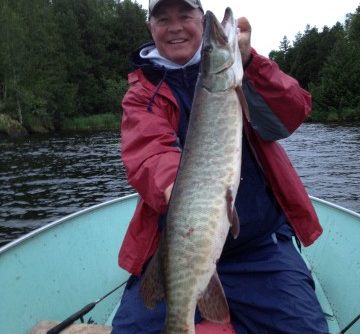 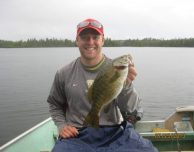 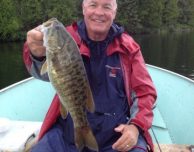