Sometimes we wonder if people keep a running total of how many fish they catch over the years. It has to be tens of thousands, right? Do you remember all of them from the smallest smallmouth bass to that trophy northern?

Jim Renslow has been coming to Nestor Falls Fly-In Outposts for several years now. Their group of 8 went to Larus Lake this year and had some great fishing. They released a ton of walleye in 6-10 feet of water using minnows, leeches, and crawlers. Besides the walleye, they caught northerns in the 35 inch range along with two that were 45 inches and one that was 42.

Besides the fish, the group saw 2 cow moose and a bull moose. One cow had twins, and the other had a single calf. They also saw the eagles that have been around the lake all year. One of the things that the Renslow party loves about fishing with Nestor Falls Fly-In is how close to nature everything is. Not only is it great fishing, but you can see all the wildlife in it’s natural state.

Oh yeah, Jim and his party tried to keep track of how many fish they released over the trip – but they lost count around 1000. When you’re bringing in that many, it’s pretty easy to lose track. Here’s to hoping they break that number next year! 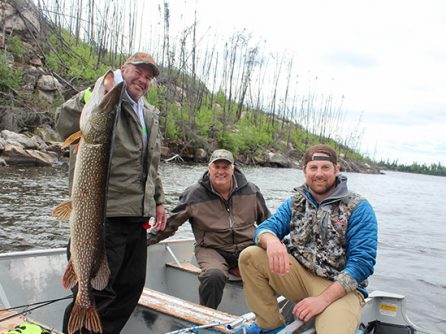 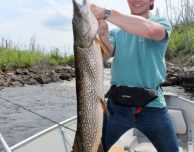 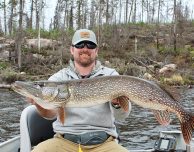