There’s nothing we love more than a grip-n-grin photo with a trophy fish! Early in the season in 2014, Terry Blevens and his group had great success out at beautiful Onepine Lake. They released 2-35″ Northerns, and a 38″ and 41″ Northern. Terry reported that they also caught Walleyes at an average size of 22″-24″, which is just spectacular. The largest Walleye they brought in was 28″!

(We’ll never know the exact secret to their success, but Terry did suggest it has something to do with chartreuse Rapala Blue Fox spinners.)

The Blevens group also got a look at a cow moose ‚Äì at about 800 lbs. she outweighed the fish but not by much!! 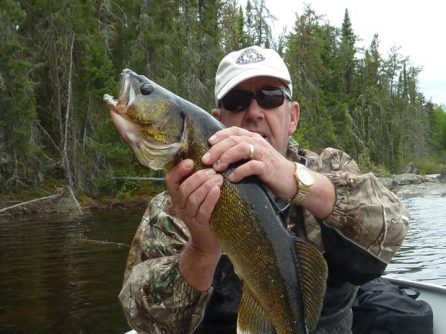