In the spring of 2014 Dave and I were looking for a new dock hand to join the team. At the start of the season, Pat sent in his resume and called us on the phone. Dave immediately felt the positive and enthusiastic personality Pat had to offer Nestor Falls Fly In. At the time, he was a seasonal tree planter and bee keeper traveling between British Columbia and New Brunswick before getting his pilots license that year. Shortly after he joined us here in Nestor Falls ready for his new adventure!

Pat Bujold was born and raised in a small town in New Brunswick, he is the second oldest of four children. When I inquired about Pat’s desire to become a pilot, he told me as a young man a friend of his dad’s took him for a flight in a 172. After that experience, he had wanted to pursue a career in aviation. Pat started to follow his dream of becoming a commercial pilot in Charlo, New Brunswick. He then headed to Kelowna, British Colombia, for his float & bush rating. 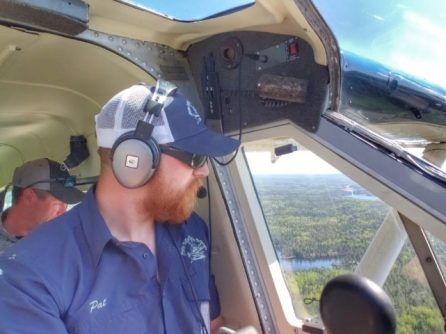