Moose On The Loose!

It was another long day for the boys flying, while Dave was waiting for the boys return he ran home to grab a quick bite as he rushed back to the base to greet the boys he drove up the big paved hill and to his disbelief, a bull moose was in the middle of the road!

He slammed on his breaks, paused for a moment so that his eyes and mind could connect. A MOOSE! Dave rushed to search for his phone we haven’t seen a moose around the base in many years due to the overpopulation of wolves, bear and deer. The moose noticed Dave or should I say his running lights on the truck and ran, but instead of heading into the woods the moose decided to choose an easier path…the road. The moose ran down the road until he realized the vehicle was not turning into the woods either and darted into the woods before Dave could capture him on his phone.

Everyone was jealous, okay maybe more me (Michelle) that Dave saw this moose but then maybe we thought he was BSing until Jonah was leaving work that night and came across the curious bull again but this time Jonah was able to capture a photo! 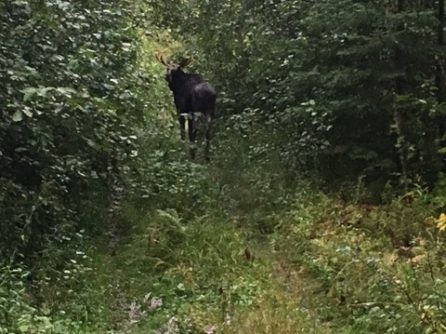