Muskie Fishing Tips – Plan your Trip around Catching a Muskie

Some people don’t really care what they catch. For them, the thrill of casting a line out and seeing what they can find is part of the fun and a key part of the experience. They might bait their hook with something specific or use a specific lure, but they don’t plan an entire trip around catching a specific fish.

Some anglers are different though. Some anglers prefer fishing for smallmouth bass because the fight they put up is challenging and fun. Some want to catch all the walleye they can because they fry up real nicely. Often though we get people who want to come to Ontario to bring in a huge muskie.

This is understandable! They’re one of the most challenging fish to find, to hook, and to bring in, so there’s a certain level of appeal to catching one and snapping a photo. But if you’re not prepared to do what it takes, you may not be able to check this item off your bucket list.

Imagine casting and casting for hours, just waiting for the opportunity. And then, suddenly, you feel it. You set your hook and start fighting, only to have your line snap as the fish begins to pull. If you hook a muskie on your 4 lb test line, you’re going to lose him. Instead, be sure you pack a sturdy rod, 20-25 lb test line, and Floro-Carbon line leader that can withstand a razor-sharp bite. If you want more gear recommendations, send us a note. We are fishermen ourselves, so we’re happy to recommend our favorite tackle.

Take Note of the Calendar

Muskies tend to hunt bigger game in the fall and will go after smaller lures in the spring. They hunt larger prey as the season progresses. If you’re coming up early, skew your lures to be a little bit smaller than if you were heading up in September.

If you’re fishing in the summer, you might have better luck near the bays where the fish are spawning, or conversely out in deep water where they’re recovering from spawning. If you’re not having luck in one area, best to check out the next one. If you ask us before you head out, we’ll point out the hotspots we’ve noticed this season.

In the mid to late season, you’ll want to check out rocky areas – reefs, outcroppings, that sort of thing. That’s where they’ll be hunting their larger prey, and they’ll be more willing to follow a lure in the warmer months.

Muskies are smart creatures, and if they’re not interested in prey, they won’t expend the energy to chase it. When you’re fishing in the spring, be sure to retrieve slowly. With their metabolism still slow from the winter, you’ll want to make the lure enticingly easy for the fish to grab.

In the summer and fall when muskies are more active, be sure to make a figure-8 at the end of each cast. That little bit of 3-D action can be the final piece of the puzzle that entices the bite. Muskies are fickle, so any little bit of an advantage can be the difference between a day of empty casts and a picture worth hanging on any wall.

Be Patient – And Don’t Give Up!

Muskies are often called “the fish of 10,000 casts,” which is probably a bit of an exaggeration. Muskies are skittish though, and using a motor – even an electric trolling motor – can spook them. It’s better to start further away and drift into your targeted spot. And don’t get discouraged if you don’t hook a muskie right away, or even if it takes you several trips. If they were easy to catch, everyone would do it!

Are you ready to book your trip out to catch muskies in the remote Canadian wilderness? Get in touch with us to reserve your spot. We’ll be sure to point out the best muskie spots before you take off. 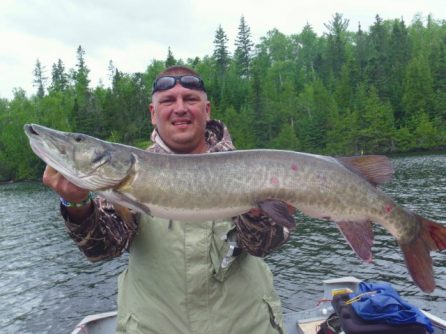 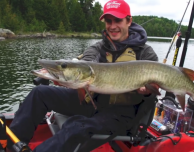 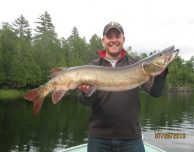 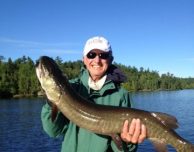 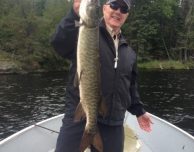