Your fly-in fishing trip in Canada won’t be the same without a trophy Northern Pike! Nestor Falls Fly-In is catch-and-release, which means there are many, many monsters for you to bring in. 40″-48″ Northerns are not unusual up here, and they’re hungry for your bait.

To make sure you get a great Northern, the anglers at Nestor Falls Fly-In want to share a couple of their fishing stories with you:

Find the Right Spot
Knowing where to cast for Northern Pike is half the battle. You’re going to find the most impressive Northerns in the cabbage, because it provides great cover. Depending on the outpost you’re at, you may also be able to check shallow bays or underwater reefs. (We’ll set you up with maps before you fly out.)

Use the Right Bait & Technique
Use rapalas, spoons, spinner baits, and jerk baits. Casting and trolling crank baits is an effective way to get these lake predators on the hook. If you’re an experienced angler, this isn’t anything you haven’t heard before, but it’s a good reminder to get your tackle ready.

Get a Walleye on the Line!
Scott Karns was fishing up at Malette and as he was releasing a smaller Walleye, a large Northern took it! He kept the line taught until he figured the Northern turned it, then played the Northern until his group landed it. What a surprise!

Pack a Net
A group out at Herod had a great story. They told us one guy wouldn’t take a landing net, and went out fishing on 8 lb. test. He thought he snagged bottom. Turned out to be a 40″ Northern Pike! He got it up to the boat twice before it broke loose. No pictures of this fish ‚Äì he should have took the landing net!

Northern Pike is some of the most exciting fishing out there. Good luck! 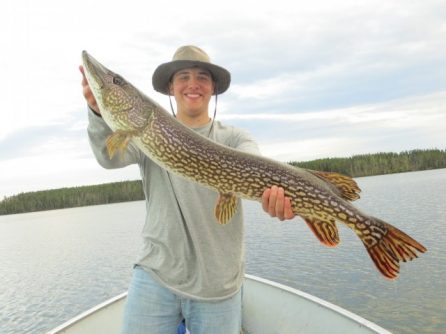 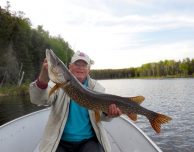