The fishing on the Nestor Falls Fly-In outpost lakes is fantastic! You can’t beat it. To give you a good idea of what’s biting, I put together a quick round-up of notes from guests. Dave (and Jon) will have you more specific advice when you get to the base, but our “report” here might help, too!

The monsters are moving, too! The Turchin party released a 31″ Northern with 3/4 of its fin missing, and 4 hrs later caught it again 400 yards away.

We’re hearing about lots of Walleye being caught at 16″ or so, a great size for eating. The trophy Walleye are easily in the 24-28″ range, with a handful of real fat ones. Watch out ‚Äì guests have been having very large Northern follow their Walleye up to the boat more often than usual. See if you can net ’em!

Ken Moe, a regular guest and friend of ours, told us the Lake Trout are at about 24″, with some nice 26-inchers in the mix. For now, you can find the Trout in deeper water, at least until they come up to spawn later in the season.

Keep your eyes on the shore! Look for Black Bears walking at the water’s edge, and Moose of course. For one group, a trip to Cairns started out with seeing 3 moose on the flight in! They also saw 3 Caribou, including a cow with her calf. Lots of Bald Eagles, Mallard Ducks, Hooded Mergansers, and Loons too.

Mike Gate is a pilot for Nestor Falls Fly-In Fishing, plus he runs a resort. Last August, he did a great video report for Angling Buzz on the fishing here: 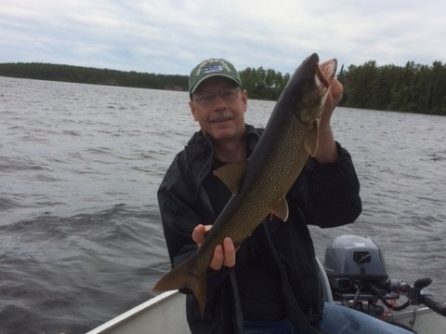 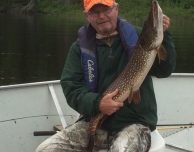 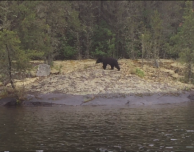