In a recent blog post, I encouraged our guests to send in their own personal stories and memories about Nestor Falls Fly In Outposts that we could share with our readers. I’m honored to share the following as the first.

We’ve had so many good trips visiting the different lakes throughout the years, but if I could share just one story it would be about how much trips to Nestor Falls meant to my father.

You see in the 1920’s my grandfather got a job at Ford Motor and moved his family from Ontario to Detroit; but every summer they would return for fishing trips and to visit with the rest of the family.

My father loved sharing stories about those trips. How they played cards and swam. How they went fishing. How they would pick blueberries and raspberries to make pies. He would remind us of how times had changed as he told stories about his mother and aunts cleaning the fish, as they cooked on wood-burning stoves.

When my father got drafted-the fishing trips stopped. It wasn’t until my teenage years that he took me back to the same side of the lake where he used to go camping and fishing and I grew to love it as much as he did.

After I graduated college, got settled in my career, and started a family of my own, I looked into Fly-in trips to Northern Ontario-that’s when I discovered Nestor Falls. I called my father and we started going on trips to the different lakes with my boys, family, and friends-trips that have continued for almost 30 years now!

As my father got older trips became more difficult, but “Ancient Joe,” as he was lovingly nicknamed, always insisted on coming with. In the summer of 2014 we had a planned a trip to Herod Lake. I had mixed feelings on whether or not we should go because my father had several strokes before that trip and if anything were to happen, we were a long way from home.

We decided to make the trip. Everyone chipped in and took turns helping my father, whether it was getting in and out of boats or putting on different lures or baits. I was amazed he never hooked himself or anyone else the way he would swing that rod around!

He caught the biggest Northern Pike and Walleye that trip-and he loved reminding us.

I was so happy we made the decision to go. That trip made him younger.

By the end of the week he was walking down the dock getting in and out of boats on his own. On the last day we took a long excursion to the far end of the lake. My father dove off the rocks and swam like he would have 20 years prior.

That trip to Herod Lake was my father’s last. The following May, he passed. But the story doesn’t end there.

On a trip to Cairns Lake in 2016, we held a memorial service for him on a beautiful rock overlooking the lake. We all went for a swim (something he loved to do), shared stories, and (thanks to a stop at the Duty Free) made a few toasts to “Ancient Joe.”

That night, the northern lights were brighter than ever so we all went out on the dock to watch. What happened next is hard to believe, but EVERYONE in the group saw the same thing-the lights formed an Angel and then transformed into the shape of a heart that was beating.

We all truly believe it was my father’s way of saying “Thanks.”

I went fishing the next day and within a few casts caught two Northern Pikes-one for him and one for me.

I want to thank you and Dave for helping us make these memories. We’re coming back to Herod Lake this summer and look forward to making more. As far as we’re concerned, nothing else compares.

Thank you to the McNabb Clan for sharing this amazing story with us. We’re proud to be part of so many wonderful memories. 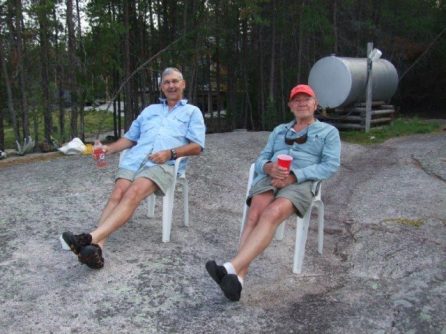 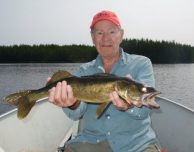