WOW! What an adventure!! We will certainly be back. This was our first trip to Nestor Falls Fly-In Outposts for James, David, Trey Collier and Jason Coldiron, and it won’t be our last.

We really didn’t know what to expect when we arrived at the Island location on Kay Lake. But it didn’t take long for us to find the Smallmouth Bass. The lake was amazing and we could not believe how clear the water was. We could see our bait’s in 20′ feet of water. The fish were still shallow the first day there. We caught them around wood and would see several chase to the boat after a hook up. Several fish could also be seen swimming around getting ready to make the move toward deeper water.

I actually caught a fish on top water the first night and dropped a tube over the boat and hooked up for a double. Pretty awesome! As the week went along, fish were moving toward deep rock & wood and near points. They would still smash the top waters, but the tubes on a drop shot around the deep wood came into play. Jerk baits also started paying off after day 1. Sexy shad, blue chrome and rainbow were the go to colors. The final day was the only day the top water bite slacked off but the crank bait bite came on. Sexy shad and chrome again were the colors. We fished many different depths but seemed like after the first couple days, we stayed in 12-15′ and worked the bait from the bank to the boat. Strikes happened from the time the bait hit the water to the final crank at the boat.

We took a few nice muskies. Trey & I both landed 40″ from Derby. Dad also had a 40″ but was by himself and he couldn’t get it in the boat. I lost a 40+ at the boat due to too small of net (LOL!) as did Trey. His was a 48-50″ that also took his favorite bait when it snapped loose at the boat. Had several follows throughout the week, just not many hookups. All came out of Derby around grass. They released hundreds keeping only a few for dinner. They had 2 days of over 100 fish caught between the members and averaged around 60 fish per day. Average size was 13-15″ but landed and released several Bass in the 3-4 lb class. All the fish where very healthy. Most of the week, the majority of the fish were taken on top water. They were throwing Rebel Pop-R’s in white, baby bass and red/white.

Trey and I had an unbelievable trip to Aniesty, landing around 50 fish in 4 hours. Several 3 lb fish in this span.

Being in the wilderness and enjoying the land that God created is comforting. From the sounds of the birds and wildlife in the mornings to falling asleep with the windows open and a breeze blowing through the cabin. Of course, seeing the Eagles every day was amazing. The beauty of the sky in the evenings was like a Bob Ross painting. Saw several beaver dams but one was HUGE! A small family could’ve stayed in that thing. After the massive thunderstorm Wednesday morning, we found a tree that appeared to have been struck by lightning in Derby. The tree was in the water and from the top to the bottom, half the trunk was charred black. Caught a huge turtle on a top water bait the first night there. Never caught a turtle on top before.

It was a dream trip.

We love hearing from our friends about their fishing trips. A big thanks to Collier family and Jason for sharing their story with us! If you are interested in sharing your story, please email it to info@nestorfalls.com 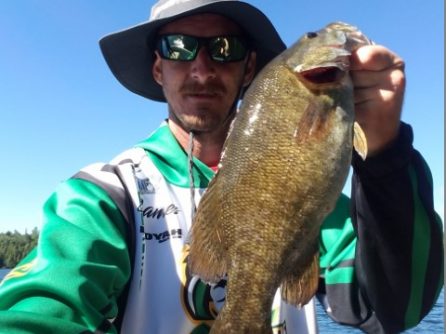 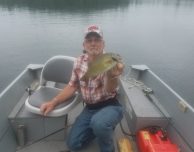 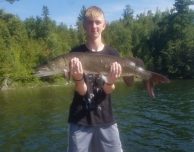