When the Montague family visits Nestor Falls, the boys have a walleye catch-and-release contest. After hauling in a whopping 98 walleyes over 18″, Troy is 2014’s winner! Even better: he caught a northern pike with his hands. With a walleye on his line, Troy noticed a huge northern approaching. When the Northern tried to grab his walleye, Troy grabbed the northern. Two for one!

Not to be outdone, his brother, Terry, released 983 fish in five days, including a 41″ northern and a 26″ walleye.

In addition to the fish, the Montagues captured great video of an Arctic tern, along with photographs of a cow coming out of the water by the portage. No trip to Nestor Falls is complete without a moose sighting! 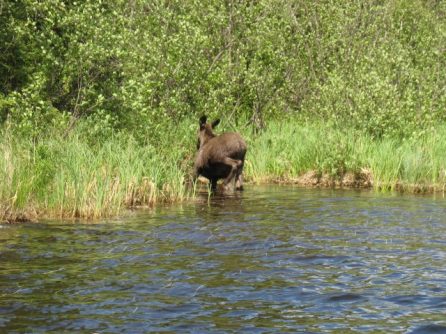