Dave and I love hearing from our guests! Mike with the Jim Britt party out at Keeper Lake sent us the best letter about his experience at Nestor Falls, and we had to share it. Take a look:

We had the BEST fishing we’ve ever had in terms of numbers of fish caught. The walleye fishing was fantastic! The four of us in 6 days released over 1,700 fish! We caught a few ‘eyes in the 19-20″ range, but most were fat, healthy 16-18″ fish. Just the right size for eating! We caught most on a jig with minnow, leech or ‘crawler, but also caught fish on a variety of crankbaits, floating-diving plugs, and plastics.

We released a couple of big Northerns. I caught a 39″ northern which tied my biggest ever, and the other Mike Britt released a 34 incher. We released a handful in the 28-30″ range too.

We motored up to the north end of Keeper Lake where it narrows down before the rapids and caught one small Northern after another – a fish on every cast just about. They weren’t trophies, but boy, were they fun to catch! We’d throw a floater-diver lure out, let it lay still, then twitch it, and a Northern would hit it every time!

In summary, we had a great time, caught a ton of fish, and can’t wait for next year!

Hope you have a great summer,
Mike Britt

You can have the fly-in fishing trip of a lifetime, too! Head over to the Openings & Specials page to see our last open weeks in 2016. 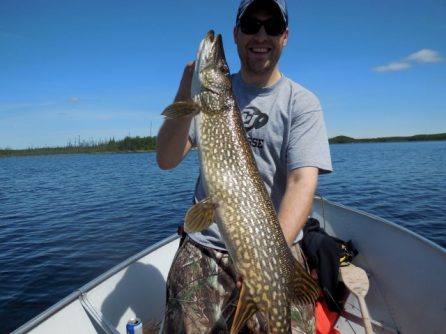 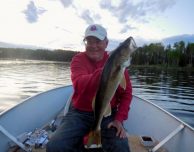 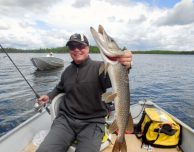 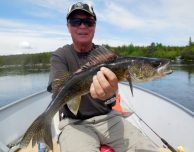