You already know Nestor Falls has the kind of water where you can kick back in the boat and relax. One thing we don’t talk about often enough are the ridiculous rapids at Larus Lake!

Larus is six miles long with two inlet rapids and plenty of deep pools ‚Äì so you’re bound to have some of the finest walleye and northern fishing in Ontario.

In June 2015, back toward the beginning of our season, Terry Vial and Brian Becker caught a couple trophy fish out at Larus: a monster 43 1/2″ northern released by Terry and a solid 26 1/4″ walleye released by Brian. They had luck in the pools to the side of the rapids.

The most typical bait of choice for our guests is a jig and a minnow or nightcrawler; seems like you can catch everything from walleye to northern pike, depending on your technique!

Speaking of catching everything ‚Äì Terry and Brian had two different moose sightings as well and saw a “cinnamon bear” along the shore. It’s incredible to be so close to nature as the only group on the lake. 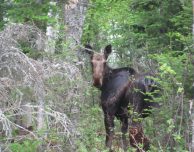 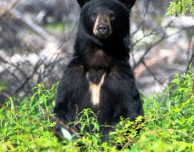